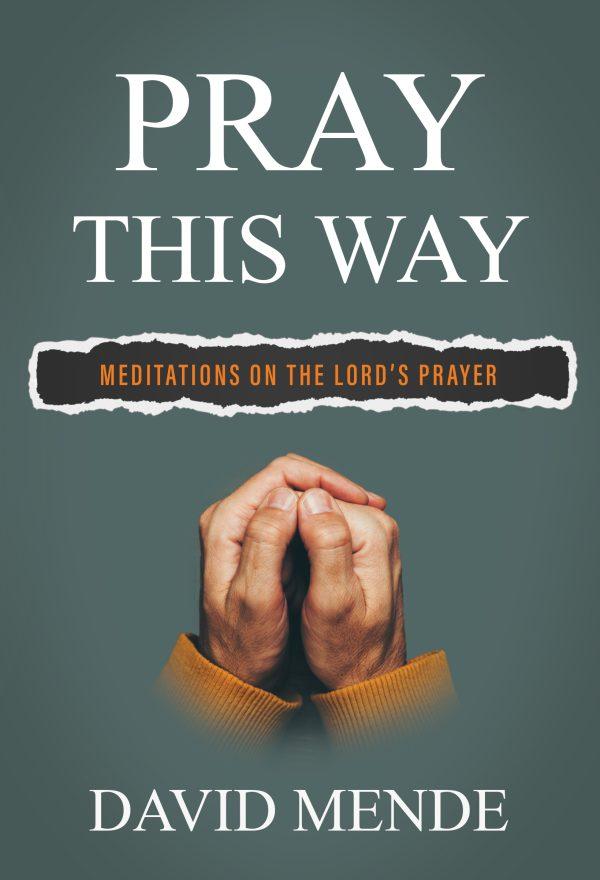 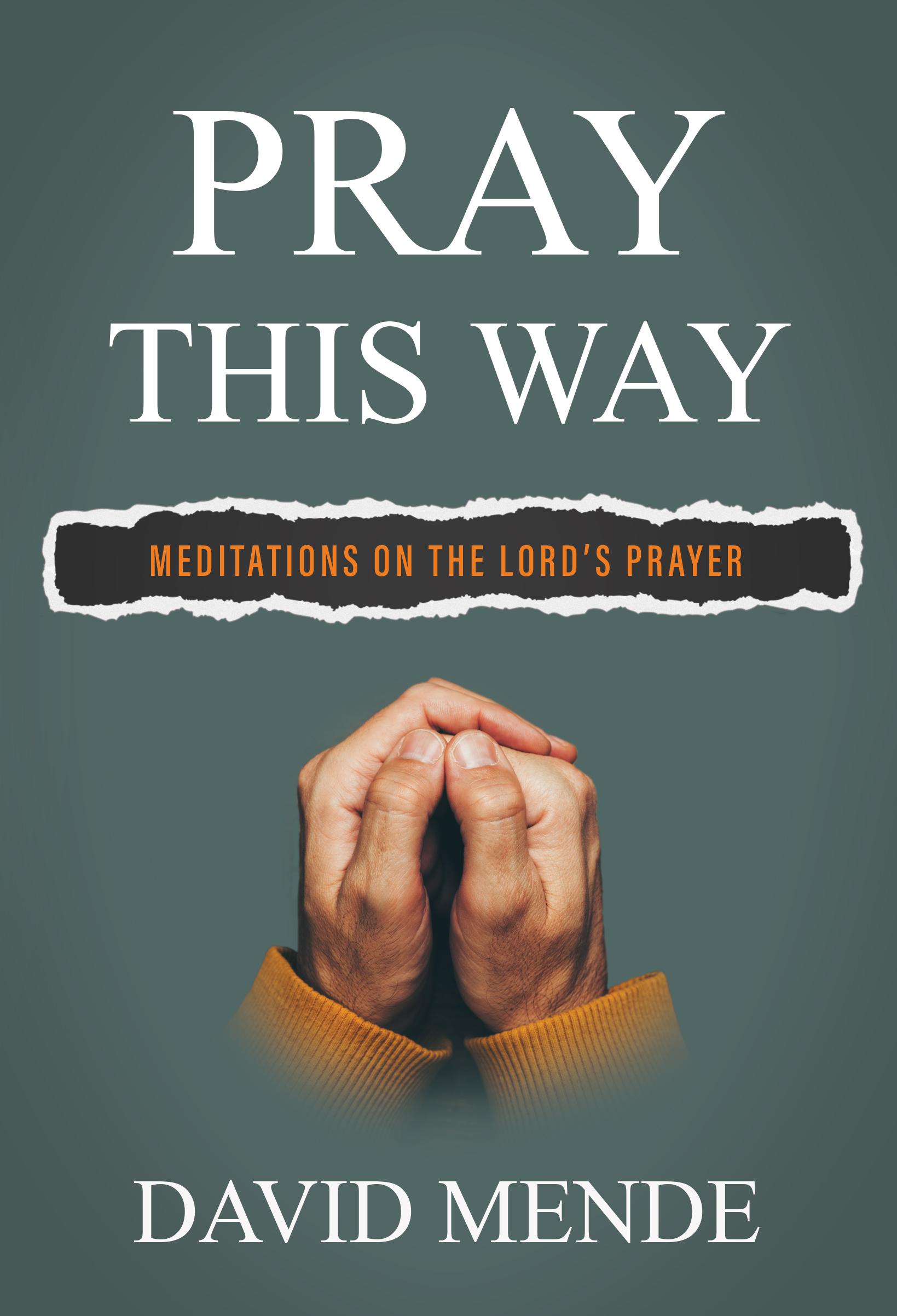 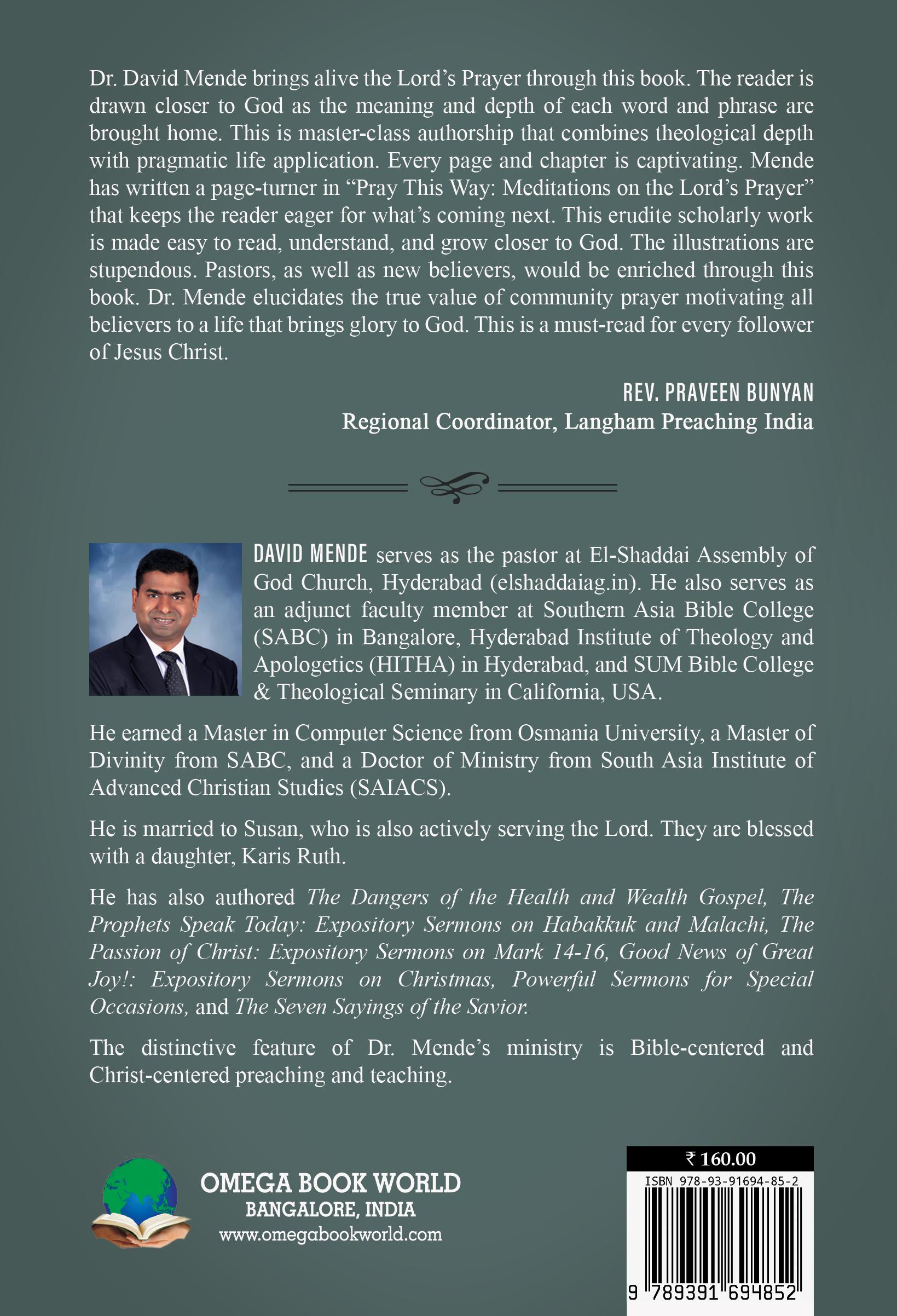 Dr. David Mende brings alive the Lord’s Prayer through this book. The reader is drawn closer to God as the meaning and depth of each word and phrase are brought home. This is master-class authorship that combines theological depth with pragmatic life application. Every page and chapter is captivating. Mende has written a page-turner in “Pray This Way: Meditations on the Lord’s Prayer” that keeps the reader eager for what’s coming next. This erudite scholarly work is made easy to read, understand, and grow closer to God. The illustrations are stupendous. Pastors, as well as new believers, would be enriched through this book. Dr. Mende elucidates the true value of community prayer motivating all believers to a life that brings glory to God. This is a must-read for every follower of Jesus Christ.

REV. DR. DAVID MENDE is an ordained minister of the South India Assemblies of God. Pastor David received the call of God in 2001 while he was studying Masters in Computer Science (MSc) at Osmania University. After completing his MSc, he worked in a Multinational Company in Hitec City, Hyderabad for a brief period. Then, in obedience to God's call, he quit his job and went to Southern Asia Bible College (SABC), Bangalore in 2004 to be equipped for ministry. In his final year, he won the Excellence in Academics award as he topped the class of 2007.

After completing the Master of Divinity program (MDiv) from SABC, Pastor David has been serving as the pastor-teacher at El-Shaddai Assembly of God Church in Hyderabad since 2007. Also, he has been involved in theological training since the beginning of his ministry. From 2007 to 2013, he taught at Trinity Christian College (TCC), Hyderabad. Then, from 2007 to 2013, he taught at SABC, Bangalore as a full-time faculty member and even served as the Dean of Students for a couple of years.

Along with his pastoral ministry, presently, Pastor David serves as an adjunct faculty member at SABC in Bangalore and Hyderabad Institute of Theology and Apologetics (HITHA) in Hyderabad, and SUM Bible College & Theological Seminary in California, USA. He completed his Doctor of Ministry (DMin) from the South Asia Institute of Advanced Christian Studies (SAIACS), Bangalore in 2017. He is married to Sis. Susan, who is also actively serving the Lord. They are blessed with a daughter, Karis Ruth.

Be the first to review “Pray This Way: Meditations on the Lord’s Prayer” Cancel reply

Sermon on the Mount

St. Francis and the Foolishness of God

His Promises: The Most Moving Words Ever Written about the Promises of Jesus