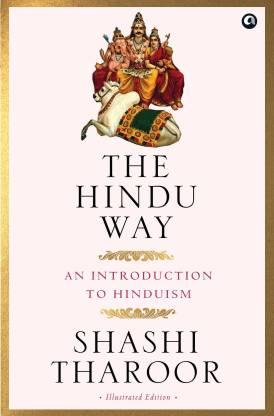 The Hindu Way: An Introduction to Hinduism

The Hindu Way: An Introduction to Hinduism

The Hindu Way: An Introduction to Hinduism, the new book by bestselling author Shashi
Tharoor, whose last three books have sold over a quarter of a million copies in hardback,
is the perfect introduction to one of the world’s oldest, largest and most complex religions.
Although there are hundreds of books on Hinduism, there are only a few which provide a lucid,
accessible, yet deeply layered account of the religion’s numerous belief systems, schools
of thought, sects, tenets, scriptures, deities, rituals, customs, festivals and philosophies.
This book is one of them. In the tradition of classics of the genre like K. M. Sen’s Hinduism
and Sarvepalli Radhakrishnan’s The Hindu View of Life, this book captures the essence of
Hinduism with brevity, insight and an enviable grasp of the myriad layers and intricacies of
one of the world’s greatest religions.

It is a book that is especially timely given the rather controversial role that religion has
played in countries around the world. The author tells us why Hinduism is a religion that
is well-suited to the needs of the world today: ‘In the twenty-first century, Hinduism has
many of the attributes of a universal religion—a religion that is personal and individualistic,
privileges the individual and does not subordinate one to a collectivity; a religion that grants
and respects complete freedom to the believer to find his or her own answers to the true
meaning of life; a religion that offers a wide range of choice in religious practice, even in
regard to the nature and form of the formless God; a religion that places great emphasis
on one’s mind, and values one’s capacity for reflection, intellectual enquiry, and self-study;
a religion that distances itself from dogma and holy writ, that is minimally prescriptive and
yet offers an abundance of options, spiritual and philosophical texts and social and cultural
practices to choose from. In a world where resistance to authority is growing, Hinduism
imposes no authorities; in a world of networked individuals, Hinduism proposes no
institutional hierarchies; in a world of open-source information-sharing, Hinduism accepts
all paths as equally valid; in a world of rapid transformations and accelerating change,
Hinduism is adaptable and flexible, which is why it has survived for nearly 4,000 years.’

The text of The Hindu Way is embellished with over a hundred photographs and illustrations,
many of them in colour, on various aspects of the religion. Based on Dr Tharoor’s extensive
writing on the subject, including the bestselling Why I Am a Hindu, this book gives the reader
an unrivalled understanding of Hinduism.

Shashi Tharoor is the bestselling author of sixteen previous books, both fiction and non-fiction, besides being a noted critic and columnist. His books include the path-breaking satire the Great Indian Novel (1989), the classic India: From Midnight to the Millennium (1997) and most recently, An Era of Darkness: The British Empire in India, for which he won the Ramnath Goenka Award for Excellence in Journalism, 2016 for Books (Non-Fiction). He was a former Under Secretary-General of the United Nations and a former Minister of State for Human Resource Development and Minister of State for External Affairs in the Government of India. He is a two-time member of the Lok Sabha from Thiruvananthapuram and chairs Parliament’s External Affairs committee. He has won numerous literary awards, including a Commonwealth Writers’ Prize and was honoured as New Age Politician of the Year (2010) by NDTV. He was awarded the Pravasi Bharatiya Samman, India’s highest honour for overseas Indians.

Be the first to review “The Hindu Way: An Introduction to Hinduism” Cancel reply

THE ONE LIFE: COLERIDGE AND HINDUISM