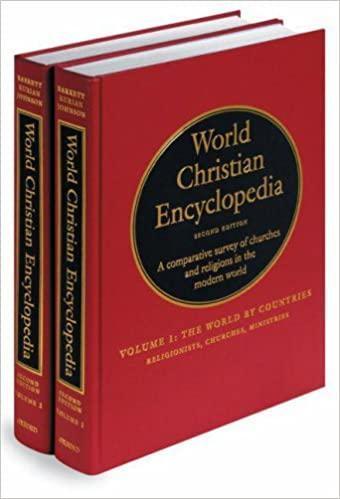 Here is the completely updated and greatly expanded new edition of a classic reference source–the comprehensive overview of the world’s largest religion in all its many versions and in both its religious and secular contexts.
Now in two volumes, the Encyclopedia presents and analyzes an unmatched wealth of information about the extent, status, and characteristics of twentieth-century Christianity worldwide. It takes full account of Christianity’s ecclesiastical branches, subdivisions, and denominations, and treats
Christianity in relation to other faiths and the secular realm. It offers an unparalleled comparative study of churches and religions throughout the modern world.
This new edition features a vast range of new and previously unpublished data on the current global situation of Christianity, on religion in general, and on the political, demographic, economic, and social characteristics of the world’s cultures and peoples in 238 countries. Each volume is
filled with essential information, from historical surveys of denominations to country-by-country profiles of churches and believers. The text sets the current status of Christianity into a rich historical context, and assesses current trends and future directions.
Many tables, charts, diagrams, photographs, a directory of names and organizations, a glossary, index, and other features ensure accessibility for specialists and non-specialists alike.
The Encyclopedia will be of great value to academics of many disciplines, clergy, administrators, and those who work in Christian and other religious organizations around the world, as well as to anyone interested in current affairs.

Be the first to review “World Christian Encyclopedia: A Comparative Survey of Churches and Religions in The Modern World 2 Volume Set 2nd Edition” Cancel reply