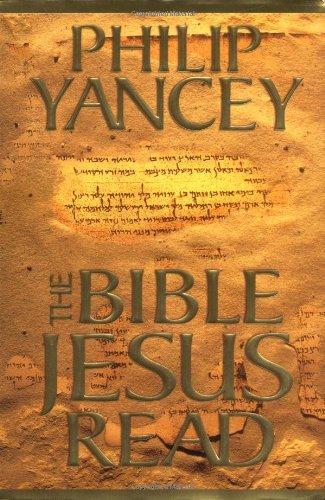 Philip Yancey has a way of confronting our most cherished — but misguided — notions about the Christian life. In his newest book, Yancey challenges the perception that the New Testament is more important than the Old, that the Hebrew Scriptures aren’t worth the time they take to read and understand them. Writing as always with keen insight into the human condition and God’s provision for it, Yancey debunks this theory once and for all. Yes, he agrees, the Old Testament can be baffling, boring, and even offensive to the modern reader. But as he personally discovered, the Old Testament is full of rewards for the one who embraces its riches. With his candid, signature style, Yancey unfolds his interactions with the Old Testament from the perspective of his own deeply personal journey. From Moses, the amazing prince of Egypt, to the psalmists’ turbulent emotions and the prophets’ oddball rantings, Yancey paints a picture of Israel’s God — and ours — that fills in the blanks of a solely New Testament vision of the Almighty. As he reconnects for us the strong, sinuous chords that bind the Old and New Testaments, Yancey reclaims the Reformers’ deep sense of unity between the two. Most important, he says, reading the Scriptures that Jesus so revered gives believers a profound new understanding of Christ, the Cornerstone of the new covenant. “The more we comprehend the Old Testament,” Yancey writes, “the more we comprehend Jesus.”

Growing up in a strict, fundamentalist church in the southern USA, a young Philip Yancey tended to view God as “a scowling Supercop, searching for anyone who might be having a good time—in order to squash them.” Yancey jokes today about being “in recovery” from a toxic church. “Of course, there were good qualities too. If a neighbor’s house burned down, the congregation would rally around and show charity—if, that is, the house belonged to a white person. I grew up confused by the contradictions. We heard about love and grace, but I didn’t experience much. And we were taught that God answers prayers, miraculously, but my father died of polio just after my first birthday, despite many prayers for his healing.”

For Yancey, reading offered a window to a different world. So, he devoured books that opened his mind, challenged his upbringing, and went against what he had been taught. A sense of betrayal engulfed him. “I felt I had been lied to. For instance, what I learned from a book like To Kill a Mockingbird or Black Like Me contradicted the racism I encountered in church. I went through a period of reacting against everything I was taught and even discarding my faith. I began my journey back mainly by encountering a world very different than I had been taught, an expansive world of beauty and goodness. Along the way I realized that God had been misrepresented to me. Cautiously, warily, I returned, circling around the faith to see if it might be true.”

Ever since, Yancey has explored the most basic questions and deepest mysteries of the Christian faith, taking millions of readers with him. Early on he crafted best-selling books such as Disappointment with God and Where is God When it Hurts? while also editing The Student Bible. He coauthored three books with the renowned surgeon Dr. Paul Brand. “No one has influenced me more,” he says. “We had quite a trade: I gave words to his faith, and in the process he gave faith to my words.” More recently, he has felt the freedom to explore central issues of the Christian faith, penning award-winning titles such as The Jesus I Never Knew, What’s So Amazing About Grace? and Prayer: Does It Make Any Difference? His books have garnered 13 Gold Medallion Awards from Christian publishers and booksellers. He currently has more than 15 million books in print, published in over 50 languages worldwide.

Yancey worked as a journalist in Chicago for some twenty years, editing the youth magazine Campus Life while also writing for a wide variety of magazines including Reader’s Digest, Saturday Evening Post, National Wildlife, and Christianity Today. In the process he interviewed diverse people enriched by their personal faith, such as President Jimmy Carter, Habitat for Humanity founder Millard Fuller, and Dame Cicely Saunders, founder of the modern hospice movement. In 1992 he and his wife Janet, a social worker and hospice chaplain, moved to the foothills of Colorado. His writing took a more personal, introspective turn even as his activities turned outward. “Writing is such an introspective act that I found myself looking for ways to connect with the planet bodily. My interests include skiing, climbing mountains, mountain-biking, golf, international travel, jogging, nature, theology (in small doses), politics, literature, and classical music.”

“I write books for myself,” he says. “I’m a pilgrim, recovering from a bad church upbringing, searching for a faith that makes its followers larger and not smaller. I feel overwhelming gratitude that I can make a living writing about the questions that most interest me. My books are a process of exploration and investigation of things I wonder about and worry about.” Yancey writes with an eye for detail, irony, and honest skepticism.

So, just how does a man who’s been through all Yancey has, draw close to the God he once feared? He spends about an hour each morning reading spiritually nourishing books, meditating, and praying. This morning time, he says, helps him “align” himself with God for the day. “I tend to go back to the Bible as a model, because I don’t know a more honest book,” Yancey explains. “I can’t think of any argument against God that isn’t already included in the Bible. To those who struggle with my books, I reply, ‘Then maybe you shouldn’t be reading them.’ Yet some people do need the kinds of books I write. They’ve been burned by the church or they’re upset about certain aspects of Christianity. I understand that feeling of disappointment, even betrayal. I feel called to speak to those living in the borderlands of faith.”

Be the first to review “The Bible Jesus Read” Cancel reply

Jesus and Scripture: Studying the New Testament Use of the Old Testament

Gandhi And Jesus – The Saving Power of Non-Violence

The Unique Christ – Dialogue in Missions